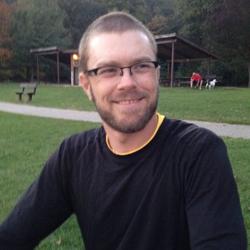 In his second year of competitive ultimate, Andrew Brown earned a spot on the Hodags, where he eventually found his on-field calling as a handler for the Wisconsin offense, playing a key role in the program's first national championship in 2003. Andrew has qualified for the USAU Club Championships 11 times with three different club teams, each of which he spent time as a captain. Internationally, Andrew competed in the WFDF World Ultimate Club Championships in 2006, 2010 and 2014. He won the 2011 Canadian Ultimate Championships, a bronze medal with Team Canada at the 2012 WFDF World Ultimate & Guts Championships, and a gold medal with Madison Club at the 2015 WFDF Pan American Ultimate Championships. Andrew currently leads the AUDL in career completions as a handler for the 4-time Midwest Division Champion Madison Radicals. Most recently, Andrew was chosen to play for Team USA (Masters) at the 2017 WFDF World Championships of Beach Ultimate and will make he club master's debut with Minneapolis Surly in 2017.