Our/my bad about the lack of write-ups…It’s easy to work up motivation after winning a tournament..but after losing, well, you know. Also, other excuses. At any rate, I’ll try to chronicle our post-Florida Warmup tournament showings up until now, and conclude with some team-wide thoughts about the rapidly approaching National tournament…

We took 5th at Stanford, after falling to Whitman in pool play, and then getting stomped in quarters by Oregon. Whitman came out strong, and didn’t let up, we weren’t able to adjust and “The Janimal” continued to zip around the field and had his hand in the majority of their points. The Ego game was a different story. Our offensive line struggled to cut through Ego’s defense, and they went up…way up…early. Mistakes snowballed and we dug ourselves a shovel-wide and shovel-deep hole before we even knew that Yelnats was Stanley backwards. Needless to say that game ended 8-15 with the Dags looking dazed and confused. Bummer. The remainder of our games were relatively strong, with solid showings against Colorado and Stanford. We also switched up lines, letting the defensive line hone their offense and vice versa.

Easterns began well, everyone seemed ready to clock in. We started off the morning with Stanford and Dartmouth, both of which seemed to go fairly smoothly. The efficiency at which North Carolina also took down Stanford and Dartmouth was…disconcerting. This was before all the hype when only select Frisbee aficionados (Benny Rainman) predicted North Carolina to be a strong contender. We played them next on the turf. They certainly brought their game, playing us point for point for the majority of the match. Sith lord Darth Tristan showed off some incredible flicks that can only be attributable to an allegiance with the Darkside. In the end we would eke out a double gamepoint win at 15-14…Solid match, they’ll surely put up a fight at nationals this year. The next game against Colorado…sucked. Not because we lost, but because of the constant torrent(shell)ial downpour. This wasn’t a drizzle, but a full-on monsoon scale rain that didn’t let up until right after the game (classic). Both sides were super sloppy, turn-city, population: us. Colorado was able to cope with slippery hands and soggy clothes better than we were, and the Micklemeister dropped pinpoint backhand breaks with Morissey playing solidly as well. Welp, that game ended rather anticlimactically and so began our Spring Break. I won’t go into that, for various reasons.

Continued training ensued. Less lifting, more speedwork and agility. The Midwest was noncompliant in allowing us to practice outside, and Sectionals was played in the snow. Regardless, the Hodags had a pretty typical sectionals, with the exception of our first and last games against Wisc-Steven’s Point and Wisc-Milwaukee, respectively. Meshnick’s best friend “Dirty Dan” defended his title and kept the match uncomfortably close, 13-11. The Dags let up a combined nine points in the next four games. Milwaukee also was able to come within two at 13-11. We learned a few important lessons, most notably being not to underestimate teams like Milwaukee and Steven’s Point (see Minnesota Grey Duck and Iowa).

Regionals. Seems like every year we joke around about how bad the weather’s going to be, silently hoping to reverse jinx ourselves and miraculously it’ll turn out to be 75, sunny, and just a touch of wind…that’s what I do, anyway. Nope. Doesn’t happen, it can’t happen. It’s just not in the cards. Regionals was postponed a week, and then relocated to Cedar Falls, Iowa, due to snowstorms in Northfield. Gimme a break man. We roll up to the fields and there are ankle-deep puddles littered across our field. At least there’s no snow…right? Our first game is against none other than the Wisco-B team! The Pimpdags. The pimps would score 5 on us before being taken down, although the team was looking pretty sharp, with some solid plays by a few players making a strong case for themselves next year. Next up, arguably the most frivolous team names in college ultimate, right in front of Seamen, ISUC, phonetically: “I SUCK.” Again, we would give up 5 before overpowering this Iowa State team. Eau Claire came after, and Cletus’ older brother, Clyde, was unable to lead the Eauzones to victory over the Hoedowns, I mean Hodags. Wisconsin Milwaukee, the game to take the pool and the matchup of the day! Confession bear: there was some worry before this game started, as Milwaukee proved a hardy contender in sectional finals (in addition to last year’s sectional finals). As Hector put it, and in meme form: “if we lay an egg here, we’re gonna have a bad time.” Losing the pool would have meant going to the other side of the bracket, and having to claw our way through Carleton and Minnesota, with one of us three not making Nationals (although that happened anyway), obviously more than possible, but still concerning. Nonetheless, The Hodags understood what was at stake and by this time had accommodated quite well to our now absurdly muddy, aptly named slop field: “The Pig Pen.” The Wisconsin Hotdogs’ defense was overwhelming, and Milwaukee seemed to be sinking ever deeper into the mud pit. The Wisconsin Spare Ribs would go on to win the pool in a decisive roast, 13-4. Sunday morning weather would prove to be far better than Saturday, surprisingly nice for regionals, actually. The Pig Pen, however, persevered, and inches of standing water/mud still lingered. Northern Iowa would be our first matchup, and the porkdags proceed to semis with a 15-11 quarters win. Lufda took down Iowa in a similar manner for their quarters, and therefore challenged us to a mud wrastlin’ match in semifinals. Simultaneously, Carleton and Minnesota set up to duke it out in the adjacent semifinals. The prospect of sizzling CUT in finals, in our very own self-made Pig Pen, was just too good, Luther was overwhelmed by the Hotdog Pit, 15-8. CUT in finals! Classic regionals. This game was awesome. It was everything regional finals matches are cracked up to be. Our offensive line was slick, our handlers were not afraid to rip it, especially to our veteran cutters like Colin, JO, and Meshnik (noob-vet), who had no issues zipping past CUT defenders (already backing by several yards). Also, JO made some absolutely reedonculous grabs, one perfect 10.0 dive into the endzone slop at a million mph, and the other a perfectly timed laser beam catch. Indeed, CUT stuck with us, and it was easily the most intense match of the year. But, in the end, the Wisconsin Hamdags defended the Pig Pen and avenged a devastating regionals loss last year, 14-11.

“You think the Pig Pen is your ally. But you merely adopted the Pen; we were born in it, molded by it. We didn’t see the grass until we’d already won, by then it was nothing to us but WEEDS!” –Bane

Alright. So now what? Nationals. In Madison, believe it or not. Our play leading up to the Sectionals and Regionals were shaky, as usual. Everyone was concerned about our offensive line’s recent tendency for execution errors, and the defensive line’s lack of experience as per usual. After the first couple practices outdoors, however, things have improved substantially. The O is leathery smooth, and the defense is stifling, with Callahan Nom Brian Hart at the helm, and other defensive phenoms like Tom “sic em” Coolidge. The plan for the next couple weeks is to continue to test one another, both mentally and physically, and practice outdoors in the wind, rain, mud, blizzard, monsoon, hurricane, or apocalypse to prepare for whatever Nationals wants to throw at us. 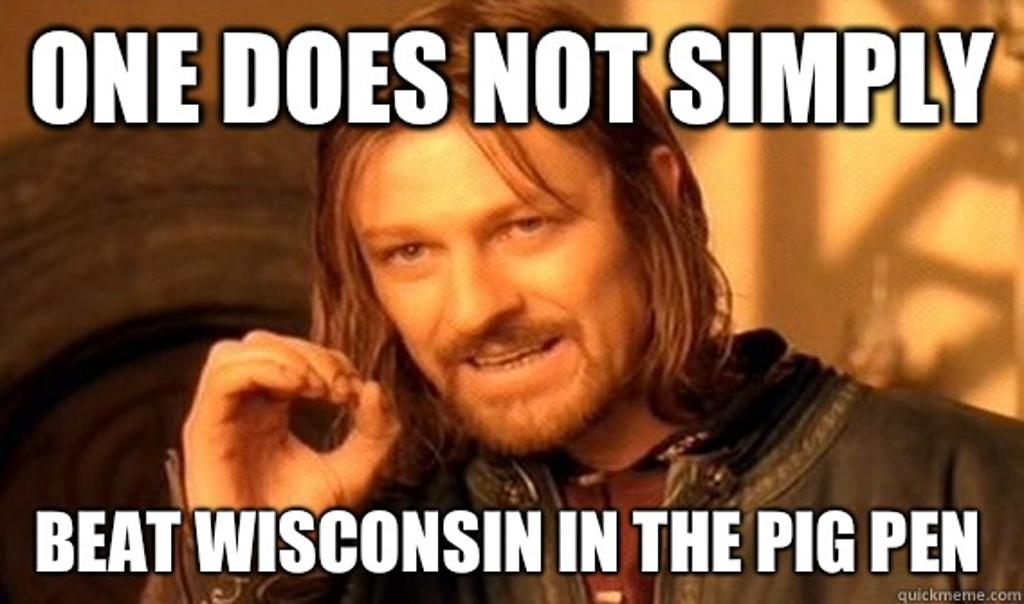