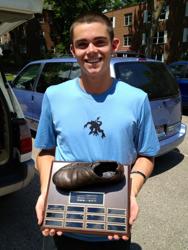 It’s such an honor to have been chosen for the inaugural Kevin Crowley Award, but first of all I would like to thank the Hodag alumni.  Our alumni are the most supportive in all of college ultimate and the creation of the Kevin Crowley Award is another way to offer support, but more importantly to commemorate one of the great Hodags who has left his legacy on the program.  The award embodies the most important aspects of being an ultimate player: putting the team goals ahead of your individual ones and having strong respect for the spirit of the game.  The seniors of 2013 voted me to receive the award not for my play on the field, but for my devotion and energy that I had put into the team the previous two years.  The Kevin Crowley Award is the epitome of Hodag Love and all of the hard work that a Hodag puts into the organization over his lifetime, giving his life to the program.  This award has provided me with a renewed ethic for this upcoming season.  My goal for this season is for the Hodags to be back on top, but my personal contributions are going to be team oriented.  I am going to be a positive contributor both on and off the field and to do what’s in the best interest of the team.  Motivating my teammates during huddles, stepping up during games and doing whatever I can do to contribute to the 2014 Wisconsin Hodags winning a national championship.